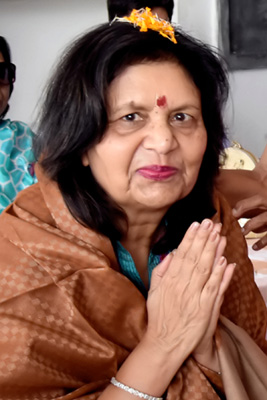 Promila Saraf’s motto is ‘work is worship’. Serving the needy is ‘Mukti’ is her belief. She is the daughter of late Sri G.M. Modi. She studied at Scindia Kanya Vidyalaya, Gwalior and graduated from Modi Degree College, Modinagar (U.P). She got married in 1963 to a well-known industrialist Sri R.K. Saraf, Chairman & Managing Director, FACOR Alloys Limited, Garividi. Hailing from cosmopolitan city of Delhi, she started her life along with her husband in a remote backward small sleepy village Garividi, Dist, Vizianagaram, Andhra Pradesh and has taken up service to people with belief as service to God, command with philanthropic philosophy inherited from her father. It is all due to the encouragement, help and support and cooperation from Sri R.K. Saraf, who is the force behind all her achievements.

Smt. Promila Saraf perceived the long felt need of an English Medium School to the residents of Shreeramnagar who are congregated from different parts of the country with different linguistic backgrounds. She established an English medium school in 1965 which is now affiliated to CBSE, New Delhi. She is the President of Smt. Godavari Devi Saraf Educational Society.

The school is imparting education through the medium of English to the wards of the residents of this industrial settlement which could not have materialised without the efforts and keen interest of Smt. Promila Saraf.

In1968 a humble start was made by providing services to the needy destitute women and the orphan boys which is now developed and expanded as a big complex known as WOMAN & CHILD WELFARE CENTRE. This center is a non-governmental voluntary organization under societies act, 1860 rendering free services to the needy handicapped, destitute and poor for the last two and half decades, at Garividi in Vizianagaram District, Andhra Pradesh in 8 acres of land. The most cherished objectives of the center is to serve humanity in every possible sphere of educability of handicapped and tapping their potential to become self reliant and live like normal.