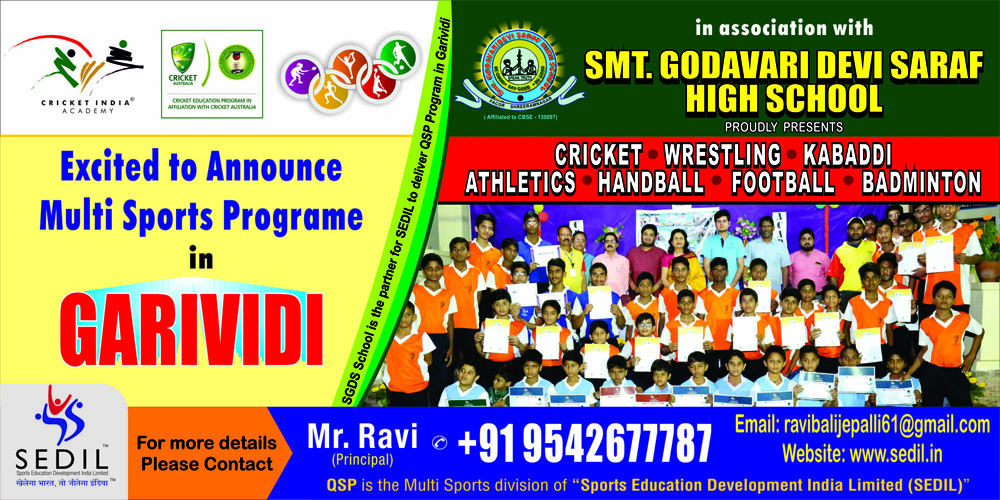 Education should be the biggest and best adventure in a child’s life. Smt. Godavari Devi Saraf Senior Secondary School is one among the best equipped in the near vicinity of Vizianagaram District.

It is one of those few educational institutions in this region that has traversed a journey of more than 50 years and yet remained contemporary competitive and relevant.

SGS aims to provide a world class education, on the basis of secularism, liberalism, development of self discipline and moral character in the students.

SGS’s origins go back to the sixth decade of 20th century with the establishment of the Sreeram Modern School in present day Shreeramnagar on August 15th 1965.SGS started its mission with a few students. Smt.Promila Saraf, the founder of SGS shaped this institution with a firm determination, devotion, loyalty and selfless love.

SGS, Shreeramnagar is committed to nurturing the self development of students, tapping the abilities of each individual. SGS creates an atmosphere in which the students gain confidence to stand on their feet, take their own decisions and reach the pinnacle of success.

SGS derives its brand image from institutional reliability, quality of education, services offered, delivery of commitments and all above the trust of parents.

The school is a place where children are encouraged to say,

In this era of cut throat competition, it is of great importance to impart an integrated education to the future citizens of the Nation for successfully facing multitasking. The SGS, therefore lays special emphasis on both co-curricular and extracurricular activities providing students an edge over others to be a leader in their respective field of activity.

We believe that students, parents and teachers play a vital role in helping students reach their greatest potential. Students are encouraged to take advantage of the many resources available to them - their teachers, the library, the computer lab and the smart classes.

In the words of Goethe – there are only two testing bequests we can hope to give our children – one of them is roots the other is wings.

The S.G.S Cricket Academy founded by Mr. Arnav Sarafji, the Vice – President of SGS High School on 13th October 2016 has an objective to impart Modern Cricket Coaching Program with a meticulously integrated Cricket pathway to enable the passionate aspirants right from an early age of 5 years onwards.

The academy has successfully completed its first year coaching session in the following groups:

During its first year, SGS Cricket Academy’s meritorious efforts are: